It’s cover reveal day for Mad Love. I’m so excited about this novel. Klay and Madi took me by the heart and ripped me apart at the same time they gave me so much life! It’s full of tattoos, pain, and redemption!

She was a disruption he never wanted.

He was everything she distrusted.

Klayton Caldwell owns a tattoo shop in Denver, Colorado, and has seen just about everything and met just about every kind of person. And they all have one thing in common. Ink.

He isn’t complicated. What you see is what you get. Sex? Always. Relationships? Never. Pleasantries? He doesn’t do that either. Those who can’t handle his mouth get inked elsewhere. Klayton holds everyone at a distance, even his friends. He doesn’t do “close.”

Until Madison ends up in his tattoo parlor, broken, afraid and alone. There’s something about her, and almost immediately, Klayton’s guard drops. Now, everything he knows about himself changes as his life begins to unravel.

Twenty-year-old Madison Hart’s future was taken from her the moment she was abducted from her college campus and held captive by a sicko. After escaping, she flees, running into a stranger. A stranger who shares a similar past. Someone who might be able to help her heal. If she’ll let him.

Madi comes into Klayton’s life like a storm. She’s beautiful. Pitiful. Dangerous. Her pain runs deep enough that she may never be able to talk about what she’s experienced. Her refusal to talk takes a level of patience Klayton’s not sure he has.

He must navigate her broken pieces by changing everything he is. Who he’s been all these years won’t work anymore. But Madi fights him, she fights herself. She fights the madness.

She refuses to talk. He can’t control his mouth. She doesn’t want to be touched. He can’t help himself. They don’t want love. Inside this storm, is a love so mad it might destroy them both.

Book 2 in the Teaching Love Series finally has a title!

Above The Stars This book is going to be angsty beautiful sexy and romantic goodness!

Book 1, Under The Peaches, is available on all major eBook retailers and the paperbacks are currently on sale for 8.99 on Amazon.

It’s time to reveal the cover for my upcoming novel, Under The Peaches. This novel is very close to my heart, and very unlike my typical work. There is no bad boy here, but a love story that looks forbidden love in the eye and breaks every rule to exist. It’s beautiful and painful, following the main lead as she tries to figure out life and her place in the world. (BLURB and GIVEAWAY below.) 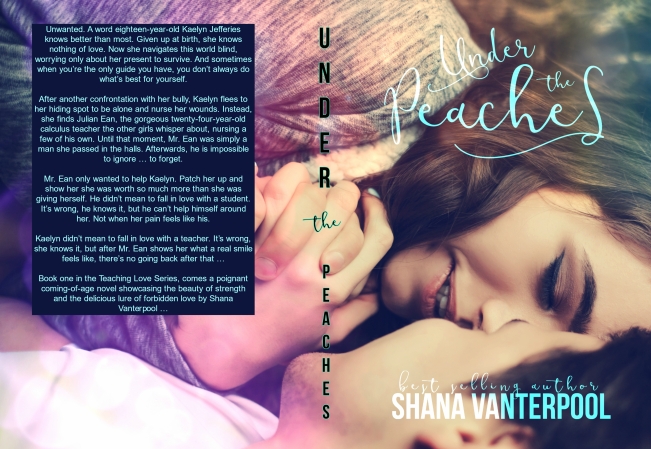 Unwanted. A word eighteen-year-old Kaelyn Jefferies knows better than most. Given up at birth, she knows nothing of love. Now she navigates this world blind, worrying only about her present to survive. And sometimes when you’re the only guide you have, you don’t always do what’s best for yourself.

After another confrontation with her bully, Kaelyn flees to her hiding spot to be alone and nurse her wounds. Instead, she finds Julian Ean, the gorgeous twenty-four-year-old calculus teacher the other girls whisper about, nursing a few of his own. Until that moment, Mr. Ean was simply a man she passed in the halls. Afterwards, he is impossible to ignore … to forget.

Mr. Ean only wanted to help Kaelyn. Patch her up and show her she was worth so much more than she was giving herself. He didn’t mean to fall in love with a student. It’s wrong, he knows it, but he can’t help himself around her. Not when her pain feels like his.

Kaelyn didn’t mean to fall in love with a teacher. It’s wrong, she knows it, but after Mr. Ean shows her what a real smile feels like, there’s no going back after that …

Book one in the Teaching Love Series, comes a poignant coming-of-age novel showcasing the beauty of strength and the delicious lure of forbidden love by Shana Vanterpool. 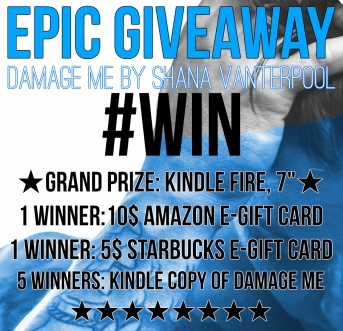 In celebration of Damage Me I am hosting an epic giveaway!
Add Damage Me on Goodreads: https://www.goodreads.com/book/show/29449901-damage-me
Preorder Damage Me on Amazon: http://www.amazon.com/dp/B01EXBCVFI

To enter this giveaway use the Rafflecopter LINK below.
THIS GIVEAWAY IS OVER AND WINNERS HAVE BEEN PICKED AND EMAILED!!!!

Now, time for the blurb reveal. I love all my books, but Damage Me tackles hard topics that are painful to read and write about. I forged a tight bond with these characters stronger than most. I watched them fall, watched them stand, and watched them heal. I devoted a lot of time to this novel and did my best to remain respectful to both sides. Damage Me is a heartbreaking novel about healing, forgiveness, and love.
*deep breath*

*** AUTHOR’S NOTE and CONTENT WARNING: This story contains triggers for rape victims and soldiers. I did my best to remain respectful to the healing process for both. Hillary’s feelings are hers alone and ONLY represent how she feels about her attack. Dylan’s emotions about his time at war are his ALONE. You are all strong and beautiful, and you will soar again! ***

Dylan Meyer lived his life fast and hard, doing anything to keep his emotions masked. In Crystal Gulf, Texas, women, drugs, and alcohol are in abundance. After all, it’s a college town. But eventually, his lifestyle caught up to him. The birth of his daughter, Aubrey, forced him to grow up and take responsibility for his actions. He let his vices go, cleaned up his act, and allowed himself to fall for Harley Evans.

But Dylan is a liar.

He lied to himself. To Harley. To his best friend, Bach. And then he lied himself right into a U.S. Army uniform. When he went to war, he left Harley with his best friend in hopes that he’d look out for her while he was deployed. Not in his darkest nightmares did he think Bach and Harley would fall in love.

Hillary Hayes is an eighteen-year-old sophomore in college who understands the importance of rules. She’s followed them her entire life. She gets perfect grades, avoids dating, and won’t stray from the future her mother mapped out. On the outside, she’s perfect. Inside, she’s drowning.

That carefully crafted future disappears when she downs a beer at a party. What’s left of that night is the wreckage of the girl she used to be.

Until she meets Dylan. Her brother’s best friend.

When Dylan returns from war, he can’t move past the betrayal. His daughter’s growing up without him. Flashbacks and PTSD from his time in Afghanistan consume him. He loses himself in a dark depression. There is no light in his darkness …until he meets Hillary. His best friend’s little sister is the only good thing among all the bad.

Can two damaged souls ever find peace, or is the damage too much to overcome?